The American Pregnancy Association (APA) is a national health organization committed to promoting reproductive and pregnancy wellness through education, support, advocacy and community awareness.  Founded in 1995, the APA currently serves over five million women and families a month through their website and toll-free education helpline.

“Over 130,000 visitors daily turn to the APA website for information about pregnancy health, nutrition, preparing for the birth experience, naming their baby, and more,” commented APA President Lynn Handley.  “We’re thrilled to be able to recommend Nightfood for those cravings that inevitably hit for most women.  With more protein, fiber, calcium, magnesium, and less sugar, fewer calories, and with ingredients to tackle nighttime heartburn, Nightfood is a more nutritionally appropriate ice cream for pregnant women than anything we’ve ever seen on the market, based on recommendations from The American College of Obstetrics and Gynecology, The Mayo Clinic, and general expert consensus on prenatal nutrition.”

According to the APA, ice cream is the food most closely associated with pregnancy cravings.  In a 2017 study published in the Journal of Pediatrics and Mother Care titled ‘Food Cravings and Aversions during Pregnancy’, the authors reported, “the most popular items craved were ice cream and other sweets, watermelon, tropical fruits, and fruits/juices”.  The study also reinforced the importance of following a healthy diet during pregnancy, and how difficult that can be in the presence of these unhealthy cravings, which are “usually met with consumption of the craved food”.

“As consumers across the country have been learning about and embracing Nightfood, we noticed an increase in social media posts from pregnant women,” observed Nightfood CEO Sean Folkson.  “Consulting with our experts, we discovered that our unique formulation, among all other ice creams on the market, best aligns with the specific nutritional needs women have during pregnancy. The American Pregnancy Association agrees, and now Nightfood is formally recommended as the single most appropriate ice cream for moms-to-be and their cravings.”

Expectant moms are in a period of great transition, highly motivated to make lifestyle changes to benefit themselves and their baby, while sharing and consuming massive amounts of information.  Cravings are an iconic hallmark of pregnancy, yet few available solutions are formulated to be healthy and tailored to the expecting mother. Ice cream is the food most powerfully connected to pregnancy cravings. Now pregnant women can feel better knowing there’s one ice cream recommended by the APA that can satisfy their cravings while also delivering key functional nutritional benefits for both mom and baby.

“With ice cream being pretty much synonymous with pregnancy cravings, I think it’s great that there’s finally an ice cream brand that I can confidently recommend to my patients,” remarked Dr. Jill Hechtman, MD, FACOG OB/GYN.  “Nutrition and sleep play an important role in every pregnancy.”

Nightfood ice cream is currently available at Harris Teeter (a division of Kroger), Lowe’s Foods, and online at BuyNightfood.com (where expecting moms can get free shipping on their first order of 8 pints or more with discount code PREGNANT).  Additional supermarket chains are expected to begin stocking Nightfood in 2020, including divisions of Albertsons, and other regional and national chains.

After manufacturing their first pint in early 2019, Nightfood secured ice cream distribution in multiple Top-10 supermarket chains in the United States, with concentrations in the Carolinas, Mid-Atlantic, the upper Midwest, and New England.

Nightfood ice cream won the 2019 Product of the Year award in the ice cream category in a Kantar survey of over 40,000 consumers.   Nightfood was also named Best New Ice Cream in the 2019 World Dairy Innovation Awards.

In February 2020, it was announced that Nightfood received the endorsement of the American Pregnancy Association as the recommended ice cream for the over three million pregnant women in the United States at any given time.  With more calcium, magnesium, zinc, fiber, and protein, and less sugar and a lower glycemic profile, Nightfood is now the Official Ice Cream of the American Pregnancy Association.

Over 80% of Americans snack regularly at night, resulting in an estimated 700M+ nighttime snack occasions weekly, and an annual spend on night snacks of over $50 billion dollars, the majority of it on options that are understood to be both unhealthy, and disruptive to sleep quality.

Scientific research indicates these unhealthy nighttime cravings are driven by human biology.  Willpower is also weakest at night, contributing to unhealthy night snacking behavior, and the majority of night snackers report feeling both guilty and out-of-control when it comes to their nighttime snacking.

Because unhealthy night snacking is biologically driven, and not a trend or a fad, management believes the category of nighttime-specific nutrition, which Nightfood is pioneering, will be a billion-dollar category. 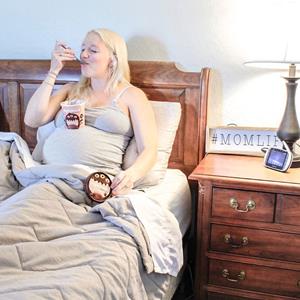 Ice cream is the food most commonly associated with pregnancy cravings